The CCIE Security syllabus lists both the ACS and the ISE for the lab. There is a huge overlap between the two though, so why would you choose one over the other, and more importantly (for me at least), which will I need to use for what in the exam?

ACS is actually at the end of its life, the last day to order 5.7 was earlier this year, so going forward the focus will be on ISE.  But where does that leave the CCIE Security lab exam takers?

Well, there are clearly a few places where ISE wins, such as guest access through portals, which is not an option with ACS, but ACS has traditionally been more concerned with device access, such as TACACS+, and without actually doing the research, ISE does not seem as fully kitted-out in this particular field (https://learningnetwork.cisco.com/message/282658#282658). However, TACACS+ was fully supported, as of ISE 2.0. But the ISE version in the lab is listed as 1.1x, pre ISE 2.0 we are limited to RADIUS. So, let’s use that version as our guiding point for ideas.

ISE 1.1 does not support TACACS+, so this is (the) one thing we can concentrate on.

Apart from this there really is not anything more where ACS trumps ISE. ISE is far more prepared for the BYOD world (Bring Your Own Device) than ACS ever was, it’s a true NAC (Network Access Control) system, offering posturing, profiling, guest access and AAA. Comparing the two, it’s really just a game of numbers, ACS 5.7 and ISE are very closely match, supporting much the same stuff, just one usually supports more than the other, such as ISE 2.0 supporting 250,000 endpoints (concurrent), as opposed to ACS’s 150,000. But then ACS can support 100,000 network devices, whereas ISE supports 30,000, and so on and so forth in this fashion. You can see a comparison between ACS and ISE here.

This kind of sizing is way beyond our interests in terms of the CCIE lab though, we will only have a (large) handful of devices to configure. So, let’s concentrate on TACACS+ for device access, and hope we don’t get any curve balls from the proctor. This forum post does help us out a bit:

Occasionally, you may see more recent software versions installed in the lab. Listed above are the base versions used. Only the features in these versions will be tested. We may change software revisions to accommodate fixes etc, but we will not test features outside of those in the exam blueprints and checklist.

So, while we might see ISE 2.0 running in the lab, TACACS+ access to devices would not be running on this version, so we would be back to ACS to that.

With all this said, and fingers crossed, let’s start going with ACS!

First of all, let’s get ACS talking to our network. The syntax is all fairly similar to the IOS, and it’s pretty quick to get the services started:

We can check the status:

Once it’s all running we access it through the browser, but, just as a word of warning, Internet Explorer does work better here. So far, Firefox has been working much better than IE or Chrome, but IE wins with ACS, which again is another good reason to switch to ISE 2.0.

We head over to Network Resources > Network Devices and AAA Clients 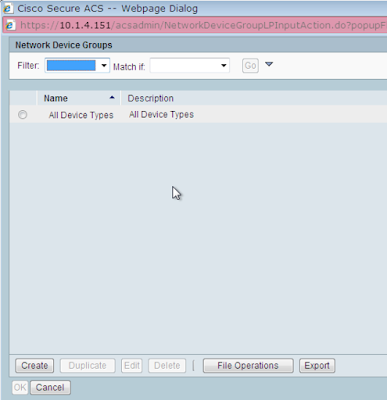 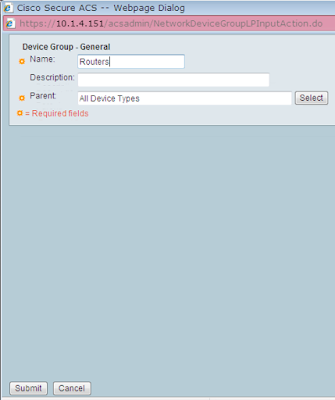 Click on Submit, I then created another group for “Firewalls” because I’ll need that later: 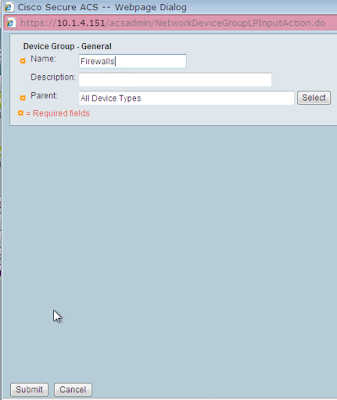 We now have two groups: 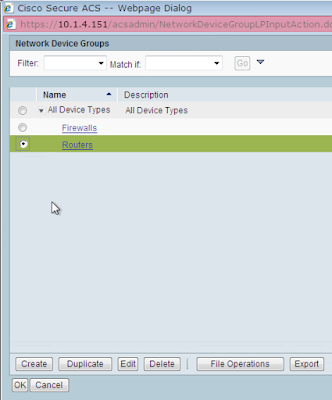 All that’s left is to fill in the rest of the details:

Fill in the IP address, and the TACACS+ shared secret. Click on Submit.

Now we have our first device:

Let’s get ACS hooked up to AD.

For this to work we need to make sure our clocks are synced, and that DNS is going to work:

Without a decent NTP server running, ACS will not join AD. Once NTP is supplying the time, and everyone agrees what the correct time is, ACS should be able to join AD: 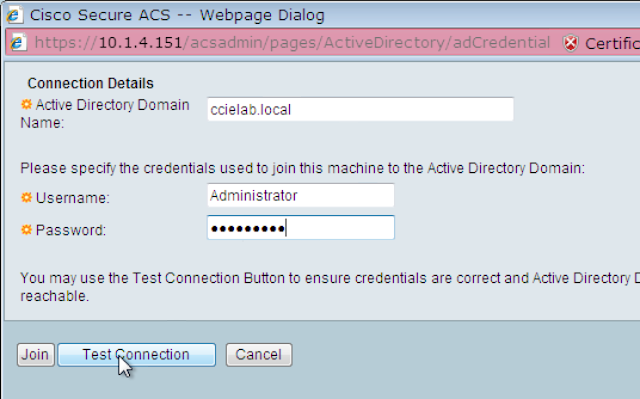 Now, we can leverage AD, and permit/limit/deny access as we see fit.

We have two users, so let’s create two security groups; network-admin, and network-support:

We can then pull these groups into ACS, by clicking on the Directory Groups tab (see above): 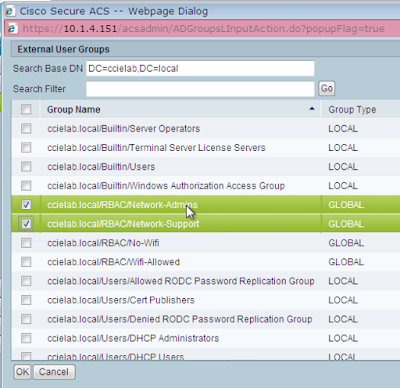 We can also use this as a Directory Attribute (which is what we will be using):

Once we have saved this, we can create a set of policies, which will use the different AD groups. 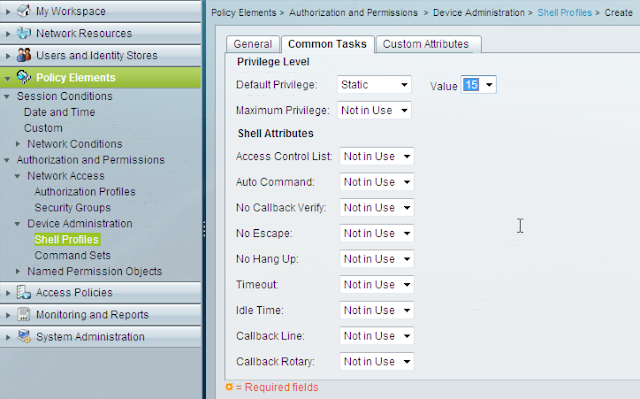 We do the same again, creating a LVL-3 group with a default privilege set to static 3:

Change this to AD1:

Next switch to the Authorization menu beneath it.

Click on Customize, and add the Compound Condition entry: 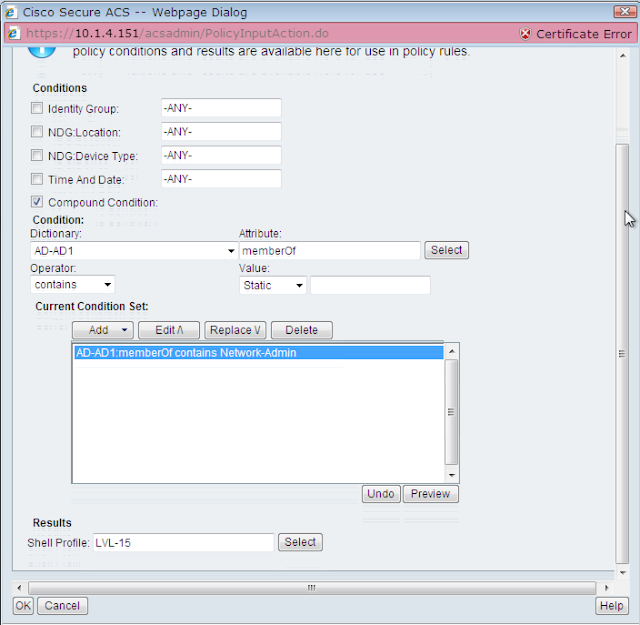 Here we have selected a compound condition, tying the memberOf attribute in AD, to the shell profile LVL-15. We do the same for the other AD group, and end up getting something like this:

Make sure you save your changes.

Let’s set up the AP-DNS server.

We only need a few commands, and these are pretty similar to the ones we saw with ISE:

In the next post we’ll look at how we can set up the ASAs for similar access, and why TACACS+ is the best solution for them (when compared with Microsoft NPS).