Welcome back to part 4 of the big lab. So far we have covered some trunking and etherchannel technologies, PPP and OSPF. Today we are going to extend our topology by adding RIP. The exam guide has RIPv2 under part 2.30 and does not have as much listed for is as OSPF or EIGRP. So what can we do with RIP? Well, apart from the obvious basic configuration we’ll use it as the intermediate routing protocol for redistribution – with the end goal being that our OSPF network will be able to talk to our EIGRP network.

Out topology has evolved since the first part of this series, and will, in all probability, change again. But at the moment it looks like this:

RIP is a Distance Vector protocol, it has a maximum of 15 hops so does not scale well in larger environments.

Interoperability between RIPv1 and RIPv2

Lets start by setting up R4: 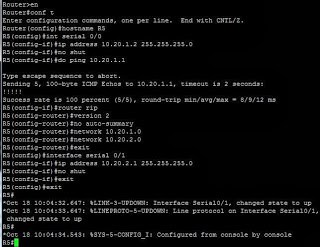 Its easier to see on R5 as we can see the interface coming up: 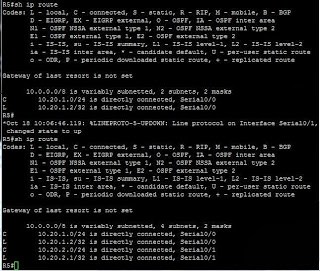 R6 and R7 were started at around the same time so we get the 10.20.3.0 network advertised into our RIP process much quicker: 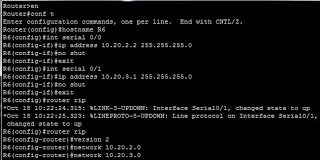 Although it is not shown the command “no auto-summary” has been set, the routing table looks good:

R7 will have a loopback address and will be used to create the tunnel over to R9 in a different post. 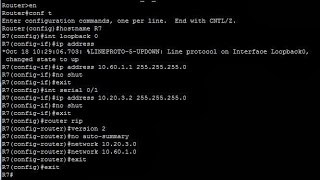 Now if we head back over to R4 we can see that out routing table now looks like this:

And we have full reachability

So far our RIPv2 implementation is very straight forward, in fact, this is the beauty of RIP in that it is very simple, doesn’t scale well for larger environments, but it is simple.

So what can we do with it now that we have it in place? We can:

RIP has four timers (default times are in brackets):

RIP timers must be identical on all routers in the RIP network, otherwise, instability will occur.

We can adjust the timers using the command

This would set the Update timer to 20 seconds, the Invalid and Hold-down timers to 120 seconds and the Flush timer to 160 seconds.

A passive interface will allow a router to listen to updates from the neighboring RIP routers, but will not send any updates back.

within the RIP process we use the command “passive-interface <interface>” command:

If we want to have even tighter control we can use the passive-interface command and use unicast instead of multicast for our neighbors.

By default, RIPv2 uses multicast to send out updates,with the IP address 224.0.0.9. We can change this to unicast by specifying the neighbor command (similar to BGP).

On R5 and R6 we will change from the default of multicast updates to unicast: 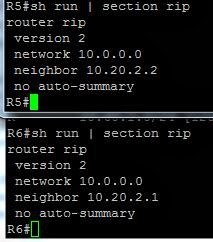 If we turn on debugging for rip we can see that on R5 its using multicast for one connection and unicast for another connection: 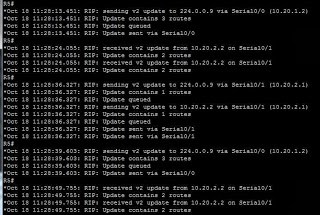 Above, we can see that it is sending an update over serial 0/1 to R6 using the 10.20.2.2 unicast address but also via multicast. To force unicast only on the specific interfaces we need to include the “passive-interface” option, once we have done this we can look at the debug output on R5 and see: 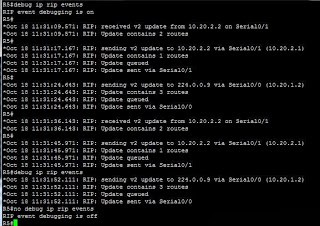 Now we can see that updates to R4 over serial 0/0 are still using the multicast address, but all updates sent and received between R5 and R6 use the unicast address.

The final thing we are going to cover today is RIPv2 authentication. 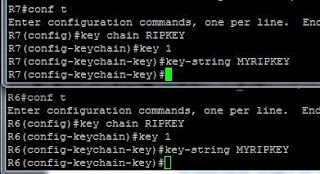 Next, we go into our respective interfaces and specify that rip will be using a keychain and what mode we are to use (clear text or md5):

It’s always worth checking back with another router (R4 in this case) to make sure that we don’t lose any routes along the way. But we can also debug the RIP database to see what’s going on.

If I remove the authentication between R6 and R7 the loopback is back:

If I try adding it back with text mode, it still loses the route. If I turn on debugging for rip we can see:

So once we remove and then re-add the keychain we can head back to R7 and finally see the authentication working correctly:

Chances are there was a space at the end of the keychain key-string, which although not visible in the config, would still be taken as part of the key-string passed between routers – a handy exam tip!

That’s it for today. In the next post, we’ll get EIGRP running before we move on to redistributing between the three protocols.