In the third part of our series, we are going to look at OSPF. This is forms part 2.40 of the CCIE Exam topics.  So looking at this more specifically, what do we actually need to cover, and do we need to expand the topology?

2.40 lists the following as concepts that we need to know:

In our current topology we can implement a standard OSPF area, and one of either b through to e. We can do the point-to-point on G, but certainly not the multi-access part, and we can look at the LSA types.

So lets see how far we can go with some loopbacks and maybe throw some more routers into the topology as we go, but before we jump in lets have a quick look at OSPF in general and from there work out what we need to add to the existing topology.

I have covered some bits of OSPF before, looking at route redistribution, and also looking at BGP where OSPF is used at the IGP. These were fairly simple implementations of OSPF and just used a backbone.

There are four different router types within OSPF, these will be highlighted in bold text below.

The backbone is Area 0, which is required for OSPF to function. As a general rule all other areas must connect to to Area 0. Routers can belong to more than one area and these routers that have say an interface in Area 0 and an interface in Area 1 are known as Area Border Routers (ABR). Because it has an interface in the backbone (area 0) it is called a Backbone router as well. If a router has a connection to area 0 but also connects to another Autonomous System (like the Internet), or redistributes another routing protocol onto OSPF it is called an Autonomous System Border Router (ASBR), in our case because R2 connects (at the moment any way) to the RIP network, it would be considered an ASBR. If a router only exists within one area then it is called an Internal Router.

So that’s router types covered and we have touched on areas, so lets look at area types.

We know of one area, and that’s area 0, we can have any number of areas and without any special commands these will be known as “Standard Areas”, but we also know that we need to know of other area types. Area types determine what LSAs will be allowed in. LSAs are Link State Advertisements and we’ll have a nice little table of these in a short while, but the area types are:

I have left LSA types 6 and 7 purposefully uncompleted as type 6 is not needed at the moment and type 7 will be covered in more detail later on.

So what can we configure at the moment given our existing topology? Well, we have R2 and R3 all ready earmarked for our OSPF portion and we could either have R2 as part of our RIP network, or instead make R4 part of our OSPF network, so lets do that instead. So R2 and R4 can act as a “standard” area. R3 we can make one of the other area types, as well as R1. So let’s make R1 a stubby area. Later on in our series we’ll see if we can add some NATing to R1 and have something purposeful we can use for our end to end tests.

R3 is not going to act as out jumping point to three more areas – a Totally Stubby, a Not So Stubby and a Totally Not So Stubby Areas, another alternative would be to use some frame relay between R3 and some other routers. 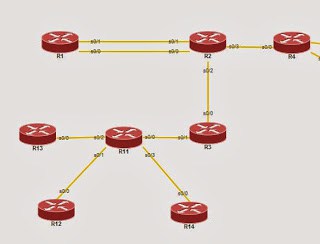 Configuring R1 as a stub

The command “area 2 stub” is all thats needed (on both routers) to set up a stub area. We can see that OSPF is playing nicely with our PPP Multilink from part 2.

We head back to R11 and set as follows: 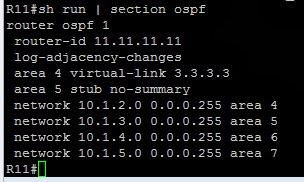 Now the routing table for R12 looks a bit tidier.

Configuring R13 as a Not So Stubby Area

So this is exactly how we would expect to see it.

Configuring R14 as a Totally Not So Stubby Area

On R11 we add the line “area 7 nssa no-summary” under the OSPF routing process and set up R14 as below:

Now at this time we can see that the Loopback address on R1 (10.10.1.1) is not seen by, or accessible to the other routers. So how can we get it visible?

We could have got around this by keeping the 1.2.3.0 network in a separate area and adding some static routing to the 10.10.1.0 network, but the CCIE exam does not like you using static routes.

Virtual-links would not have worked in this instances as a stub zone cannot contain a virtual link:

We can have area 1 as a stub, and could add routers to one of the other interfaces on R1 and have a full stub zone, but hopefully at this stage you get the general idea or the area types.

We will revisit how the different area types come in to play when we move on to RIP and start redistributing some routes from RIP into OSPF in part 4 of The BIG lab. We havn’t covered part G yet, but let;’s just go through OSPF graceful restart before we finish.

Graceful restart which is part of NonSop forwarding (NSF) (RFC 3623) that allows a router with multiple processors to restart the control plane (and therefore the OSPF proccesses within it) without needing to restart the entire router, whilst one processor is restarting the other will continue to forward the traffic. This is one of those “need to know but won’t be coming up in the lab” things.

In part 4 we will set up RIP, and maybe figure out what we are going to do with the Frame Relay routers, I’ll probably extend the rip network, add some loopbacks and maybe use them for some NAT statements. We’ll redistribute RIP into OSPF and vice versa, and see how our different OSPF areas handle external routes.