When we are redistributing from one protocol into another, we find that with one point of redistribution everything is fine, but when we have multiple points of redistribution we can start to encounter problems, namely routing loops and route feedback. Thankfully these can be fixed with a few commands.

In the diagram above we are redistributing RIP into OSPF, and from OSPF into RIP. Ignore the mislabelled interface for Router C (the interface in the RIP network is actually e0/1), I made a mistake in my original netmap. I wondered why things didn’t work properly. Originally I did this in Packet Tracer, only to find a serious limitation was the lack of distribute-lists and limitations on the distance command.

First, we begin with very straight-forward OSPF and RIP networks. Picking RouterA and RouterF, we quickly check that the basics are all plumbed in: 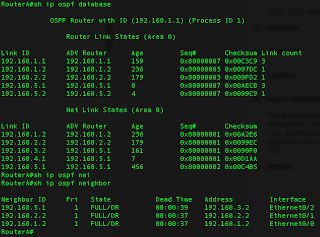 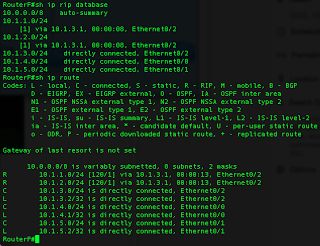 The routing tables on routers C and D look like this:

To create the routing loop we need to mutually redistribute OSPF and RIP on routers C and D. The commands are identical for both.

And we can see (using the “sh ip route” command) the contents of the routing table:

Now we can start to see the problem.

The reason for this because the AD (Administrative Distance) of OSPF (110) is lower than the AD for RIP (120), and therefore is the preferred route. The AD can be seen as the first number in the square brackets [110/1] and [120/1]. Therefore to reach the non-connected networks, Routers C and D will prefer the sub-optimal path through OSPF. 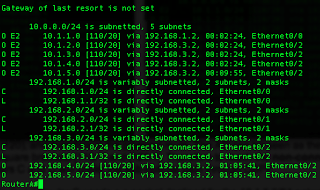 Router A will pass the packet to Router B, and from B it passes to Router D. This does not present itself as much of an issue, but look at the routes for the 10.1.4/0/24 network.

Thankfully, all is not lost (well, maybe a few packets along the way), and we have two ways of fixing this scenario.

The first method is to use a distribution list and attach it to the interface we want to prevent accepting routes from the wrong side. The configuration on Router C would be as follows:

And Router D would look similar:

These access lists deny the RIP networks specified, whilst permitting all the other networks. We can see this taking effect immediately in the routing table:

The downside of this method is that any form of redundancy is also lost. If Router C lost its e0/1 interface it would not be able to select an alternative path (i.e. through the RIP network) for the other OSPF networks.

Fixing a routing loop with the distance command

The second method we have available is to tweak the AD for the specific routes. it is very similar to the first method, but with a few changes, we can either lower the AD of the routes learned through RIP, or raise the AD of the external OSPF learned routes. Again we start with an access list:

Here we are applying an AD of 70 for the routes specified in access list 10. Again Router D’s config would be similar, but I think you can see what needs changing, so I won’t the config here.

The end result is that the routes originating from RIP will now have a lower AD than the routes that have been redistributed from OSPF. This eliminates the routing loops.

If we decided that we wanted to use the second method and raise the AD for the external OSPF learned routes then we can do this with one line, and do not need the access list:

Router C and Router D then replaced the externally learned routes with the routes learned by its own RIP process: 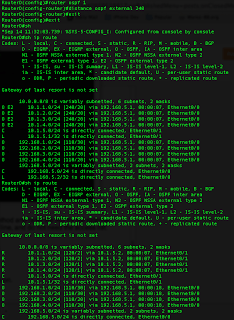 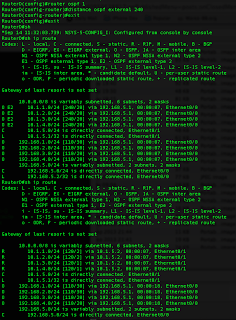 Router D is probably the best example of the process, as the screenshot managed to catch the transition in routes, firstly as their AD is increased to 240, and then, moments later, as these routes are replaced by the ones originating from within RIP.

The OSPF routes that have been redistributed into RIP by Router C will also reach Router D, and will again be redistributed back into OSPF. hence the term “feedback”.

The feedback could very well cause Router B to prefer the route through RouterD for the 192.168.2.0/24 network. This is called suboptimal routing.

Clearly, we want to make sure that no re-injection occurs. We can do this through distribution lists and by using the distance command, but lets look at route tags instead.

We can tag routes in order to identify and filter them. The tag is retained as it passes from router to router. So a tag that is applied when it is redistributed into RIP (say from Router C) retains its tag and can be used by another router (Router D) to be filtered out.

We use route-maps in order to apply tags, these are similar to access-lists by using permit or deny statements but also allow attributes to be matched and set.

Using RouterC are the example, the route maps would look like this (I have added line numbers for reference later on):

So here, any OSPF routes that are being redistributed into RIP have a tag of 44 set (line 4). When RIP is redistributed back into OSPF any tag that matches 44 is denied (lines 8 and 9).

We can see above the tag being added to the routes. Unfortunately,I could not get and routes to feedback to show you this in action, sometimes its annoying when things work properly!

Nonetheless, the end result is that routes will not be redistributed back into the routing domain from where they originated.

I hope you have found this useful.