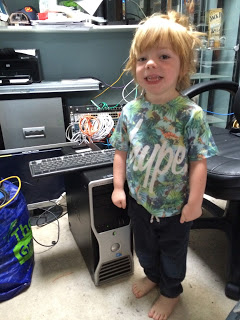 My new server arrived on Thursday. I had been toying with what to get for a couple of weeks and found what I thought was a bargain on eBay.

The best part was that the seller had two of them, and then upped the price by £350!

It just goes to show that timing is everything! I am very pleased that not waiting a day or two saved me a stack of cash.

It was a barebones setup, so I added a 120Gb SSD to hold the OS, and a 750Gb SATA drive. It took some time to get the second HD running, as that channel was disabled in the BIOS. Took me a little while to figure this out, but now it’s running nicely. I was helped by one of my boys. He put the DVD in the drive and plugged cables in for me.

The best thing about it is that compared to my old server (which you can see in the background on the first picture), that I used for my R&S, it’s nearly completely silent. My wife will be much happier about this, and it makes studying easier, as it’s hard to concentrate when it sounds like you are sitting in a wind tunnel (or a server room).

The Security lab server is loaded with ESXi 6.0, and the vSphere server appliance is running on it. Being a Mac user it’s either using that or having to run a Windows VM for management.

I have migrated UNL from VMWare Fusion on my Mac to the new server and upped the CPU count to 12, and the memory from 8GB (the limit in Fusion) to 40GB, which, by my calculation, is the minimum memory requirement for the CCIE Security lab. 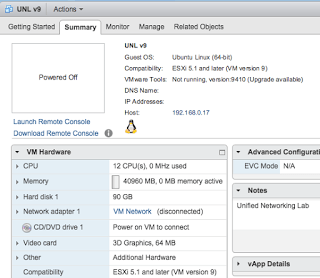 I think somethings will have to run as ESXi hosts, namely the ISE, but the benefit of the full VMWare solution is the enhanced memory handling – such as over commitment. That said, the first DIMM slots have 4GB sticks in them, so I could upgrade these to 8GB sticks and gain and additional 24GB or memory, taking the total up to 72GB. The system can take a maximum of 96GB. So there is a lot of scope for expansion.

I think I will need to add an ethernet card, probably a quad one, as I will need to link into to components such as the Access Point, ISE etc.  But this bit can wait a few months.It’s looking good so far. The books have started to arrive, and I am formulating my study plan.

I am quite pleased with my new security lab server!

I also managed to clear up the garage so we can fit a chest freezer in tomorrow. It’s going to be a busy weekend!