Home
CCIE
What do people use the most for their CCIE studies?

I have been running a poll on the site for a while now, to get a feel for what people are using for the practical part of their CCIE studies. The results are in, and thank you to those who have taken part in the poll.

Here are the results in reverse order, and if you don’t want to do the reading then skip to the end where there is a pie chart.

1% of respondents are using VMWare. VMWare is a great platform, but, historically, not ideally suited to the CCIE. This has started to change somewhat, as the CSR 1000v router works well on it, but, then there is the costs associated with using this platform, if you are running 10 routers then you are going to need 32GB of ram, running 20 you’ll need 64GB ram, and this is all on the basis that you have a machine to hand that can run VMWare. Not a surprising result.

8% of you have either a very accommodating employer, or a lot of cash to drop. I did go down this route, and got all the hardware a couple of weeks before the V5 was announced and all my routers (barring the 18xx series) became pretty much obsolete. But there are a number of you lucky enough to have the full hardware based experience! Lucky you, really there is nothing like the real thing.

25% of people are using IOU. IOU is great for many reasons, firstly the version level supported is much closer to the one used in the exam, it’s free (yay!), and you can run a large topology inside a VM with very little memory overhead. The downside is that it is harder to get into, those without any Linux experience may be put off, and designing your own topologies does take some getting used to, It works great, but isn’t for the faint-hearted.

25% have opted to use real switches and a virtualised environment. This setup does make the most sense, as all the virtualised environments have issues when it comes to layer 2 technologies. The switches can be bought (on eBay) for a few hundred (pounds), and as the routing functions work great in virtual environments it eliminates the chances of errors due to a layer 2 feature not being supported, or, if supported, not working as it should (I am looking at you HSRP!). There are some downsides to this setup, mainly the cost, portability and space concerns, but it does offer the best of both worlds.

36% of people are using GNS3. It has been around for years, and it making huge waves as it progresses from the 0.8 version that we have known and loved for ages to this all-encompassing vital tool, allowing you to run VirtualBox VMs, connect to IOU and to real hardware, if you don’t want to do that then it runs 7200 series routers (which support IOS 15) very well. It is of no surprise then, that GNS3 is the tool of choice for the aspiring CCIE. The downsides of GNS3? Not many really, it does have a propensity to make your CPU run hot, but playing around with idle PC values can mitigate that, and you are limited by the amount of memory you have if you are running native GNS3 routers.

The lines in this poll are slightly blurred though as some may be using real hardware and GNS3, or real hardware and IOU, for instance, which really does push their numbers up, but it does give a good indication as to what people are using.

Whatever platform you choose, I wish you all the very best in your studies. 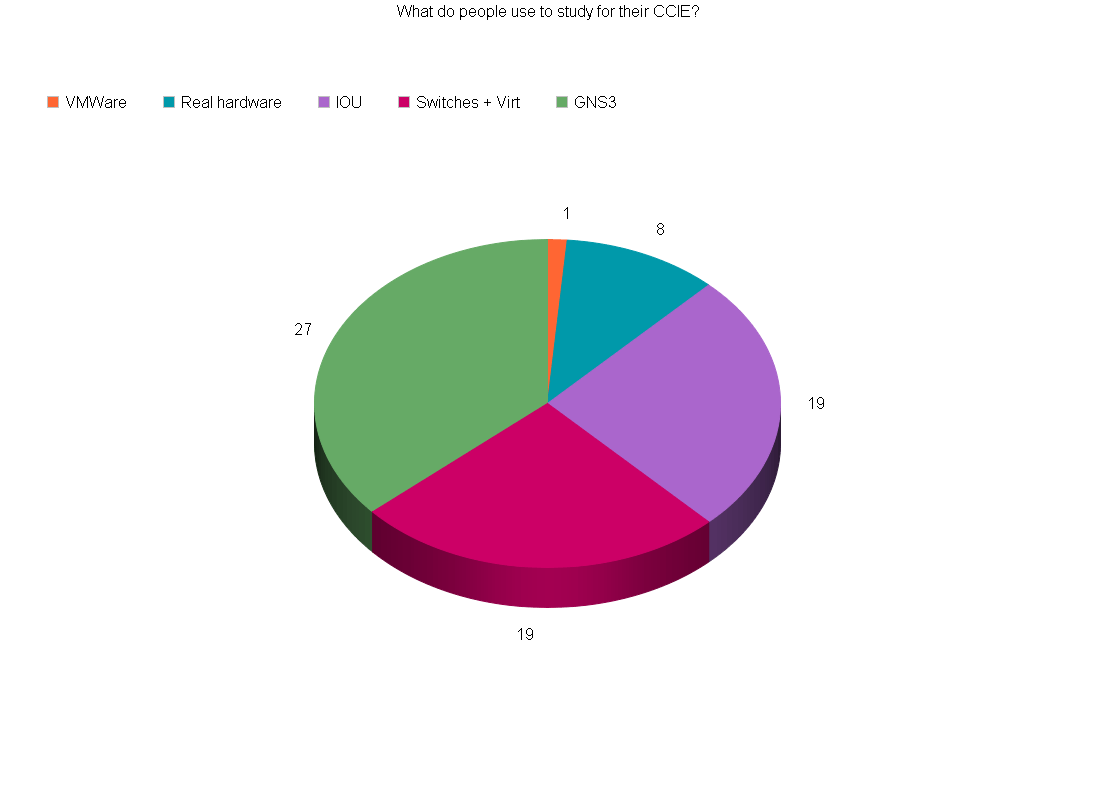