My lab exam is on Friday, so I have a few hours today, a few tomorrow and then Monday to Thursday, it’s a mere five days to get stuff right and it isn’t.

ACS is kicking my arse and I can’t figure out why. I have had this working before, but I have spent two days trying to get this to work, and it’s two days that I cannot afford to spend fucking about.

I am consoling myself by listening to some angry hip-hop:

My musical taste has not really moved on since the 90’s. But I digress. Hopefully, by blogging about it, it might give me a chance to figure out why it is not working – or someone else might point out my problem (with ACS, not any of my other problems)…

We have a location: 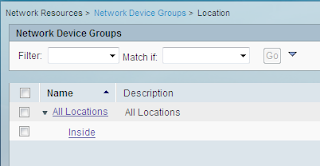 We have a device type: 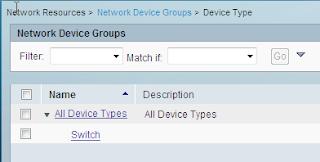 We have two devices. Originally I was just using SW6 (a router image with a switch module), thinking it might be a version issue I added R6:

We have two identity groups (Admins and Users): 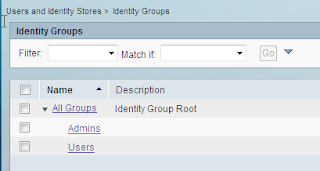 We have two users (Admin1 and User1). These are in the groups above:

We have two Shell profiles, one for Admins, one for Users.

The User one gets a privilege of 8.

We have some allowed commands: 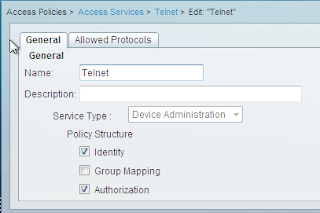 Telnet looks for a device type of Switch, and a location of Inside. It matches the Tacacs protocol, and internal users: 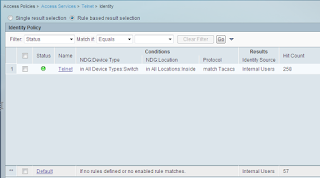 The Authorization part of Telnet set up the mapping Users should get the User-Shell and the User-Commands. 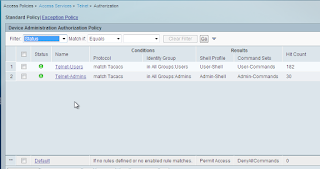 But when I try, I do not get the desired result. We do not match a permit rule, when logging in as User1: 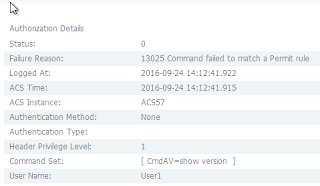 As the next two grabs show, we should get the User-Commands command set, we are found in the ACS Users Identity group, the service selection rule matches Telnet, as does the Identity policy.

We have a hit on the Telnet-Users – so we *should* get the shell and command set matching this.

But we don’t. We pass authentication, but not authorization: 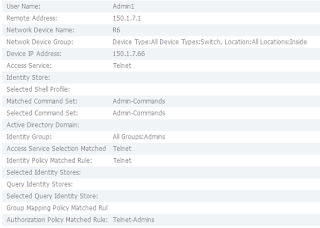 So, clearly, something is different between the User and Admin configurations.The Admin-Commands has the tick next to “Permit any command that is not listed in the table below: 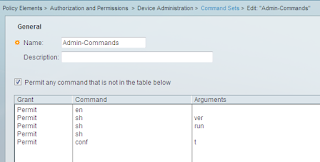 If this is unticked, commands that are permitted actually fail:

You can see that when unticked the command fails and works when ticked. So, actually, there is no difference in working/not working when comparing the User setup to the Admin setup. Something is just wrong, somewhere.

Here is the R6 config that should talk to ACS:

I added a few changes:

But the problem remains the same.

I now have four days left before the lab. not feeling too good about it, to be honest!

But I need to move on, give myself a break from ACS and come back to it another day, not that I have many days remaining.

I now have it working. I created a new access policy (Telnet-2), but on the Identity I set the conditions to be:

The authorization part remained the same (albeit with the Command Sets result being first).

This gave me the desired result.

I think the issue with the first try was that the protocol condition would not be correct, the connection would be Telnet.

Got there in the end.