Home
CCIE Security
CCIE:Sec v5
Yoga and the art of Zero to Hero

I am getting back into the swing of studying now. It’s been a tough few months in terms of getting my arse into gear. I lost momentum and desire, two really big factors. Once these go, it is hard to get back on the study horse. So I started slowly, hoping that the Zero to Hero Micronics course would give me the kick I needed, we’ll get into that shortly.

Work has been a bit crazy lately, big projects underway, which includes a global rollout of Palo Alto firewalls along with a new 2-factor authentication solution, which is all new to me. But, after a couple of weeks of looking at nothing but the Palo Alto screens, I am nearly ready to present a proof of concept next week. Not bad. Anyway, point is, it’s hard to get into study mode when work is so busy, but I must and now the impetus is back again. Interest is renewed, the mind is clear, the goal is focused and this is what is key.

So, let’s talk a little about the Micronics Zero to Hero course.

Most of the class are at Week 13 now. I am probably somewhere around Week 9, due to holidays (missed two Saturdays because of driving to and from the South of France, and the one in the middle because the Internet crapped out at the holiday house), but the lectures are recorded, so I can catch up. We have moved onto ISE now, which I always find to be an interesting topic. The wife is getting a little fed up with not seeing me on a Saturday (I take the boys to football in the morning, then studying in the afternoon), but she is off to Thailand for two weeks anyway, so it all evens out in the end.

Piotr is a good teacher, he definitely knows his stuff. There is a little bit of an accent to overcome, but he is clear and easy to understand 98% of the time. The class is a mixture of all skills, so at times can be a little slower than a second-time-CCIE-attempter would like, but it is good to start with the basics, which is what this course is all about, it is Zero to Hero, so everyone is welcome and no one is left behind.

I haven’t really bothered with the equipment offered at the moment, I preferred to recreate the environment at home, the mindset being that I will understand it more and it will also help get the mind focused. Some have mentioned that the lab access was a bit slow at times, but Piotr is quick to remedy that.

The one problem I have had is in my note-taking.

I love using OneNote, it is a great tool. So I try and type as Piotr is talking and showing the whiteboard. Unfortunately, I also edit my typing as he is going, so I end up missing what he is saying (luckily the course is recorded for later viewing). I can’t replicate the diagrams in OneNote using a mouse though, it is really not easy. So I pondered turning back to using pen and paper – but still, I would have to do the drawings somehow on the computer – again, not easy.

Using write to text on the Surface for the first time this is awesome in tablet mode!! Especially when on a small airplane.

This got me thinking. Now I don’t have £1500 to drop on a new laptop, so I started to look at cheaper alternatives. I came across the Lenovo Yoga Book. These come in two varieties, Android and Windows (10). Usually, I would avoid Windows, but ONLY OneNote in Windows supports “Ink to Text”. So I went for the Windows one. Thanks to Amazon Prime it arrived the next day.

Hands-on with the Lenovo Yoga Book

As is usual with Microsoft Windows, there was a very long period of updates and reboots before it was happy and this is part of the reason why I am not a Windows fan, but such is life!

The Yoga book is very light, with the usual clam-shell type design.

One side is the screen, the other side is either the “Halo” keyboard or the digitizer. 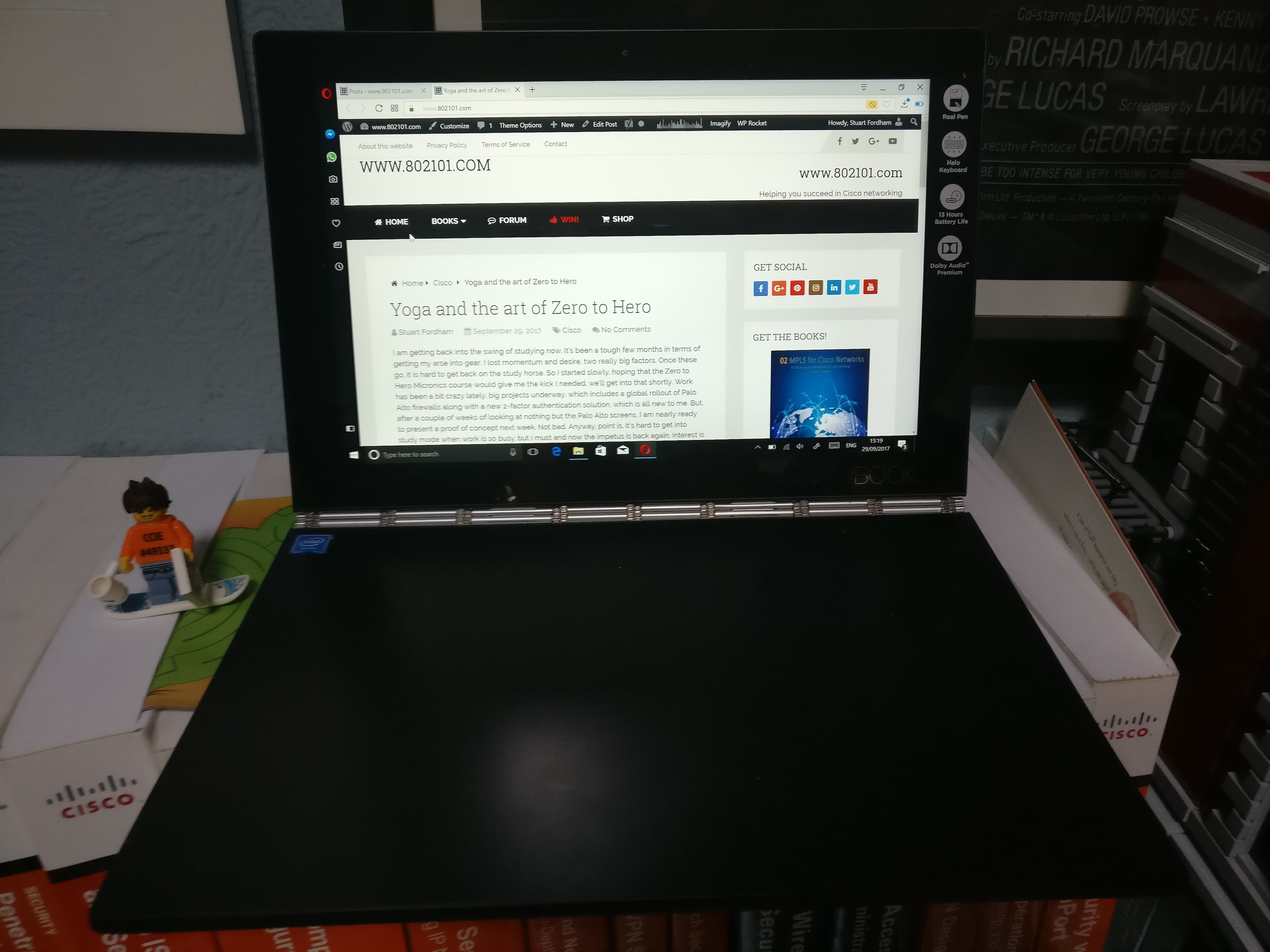 It is extremely thin, thinner than a Lego coffee cup: 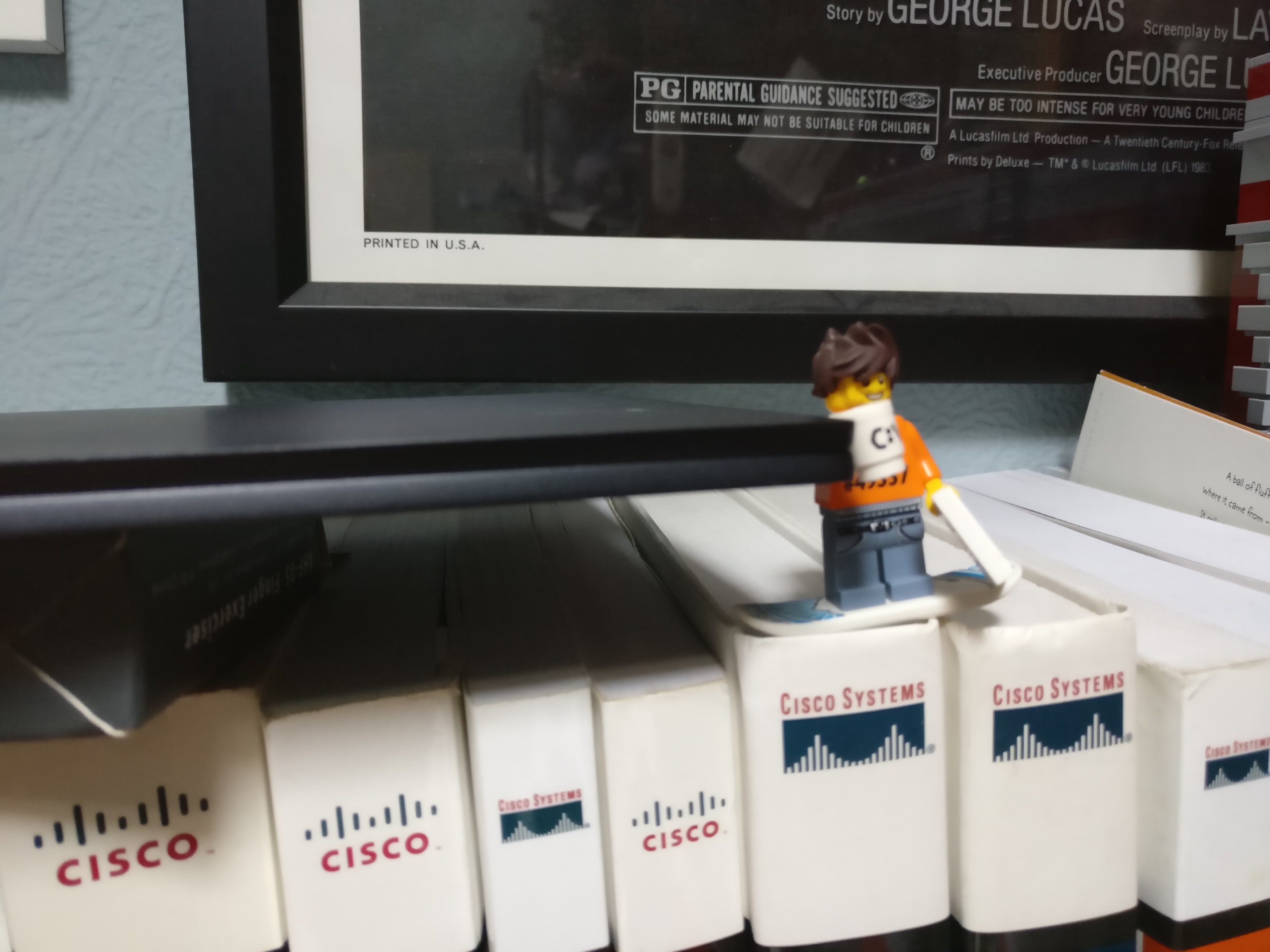 The hinges seem pretty robust, but do make a sound like there is a bit of metal trapped somewhere in the casing, this isn’t the case, but they are metal, like a watch strap and just make that sound. I don’t think the laptop would take much punishment to break it, so I am keeping it upstairs, well away from accident-prone five-year-olds. A suitable case can be used to add protection, though, but still, it does feel almost too thin to last as long as a normal laptop.

Still, time will tell, and it’s not like “normal” laptops never break. All it takes is one well-meaning father in law to sit on the seat he forgot he put the laptop underneath in order to keep it away from prying eyes, and that’s a new laptop screen required. So it’s probably going to last as long as you look after it really.

So, in practice, how does it stand up against reading on a tablet, such as a Kindle? Actually, pretty well. One of my major issues with the Kindle is that PDF support is limited, they get hidden away under “Documents” for a start, instead of appearing as Books as I would like. There are third-party programs, but still, I much prefer to read MOBI files on the Kindle.

Reading, especially PDFs on the Yoga Book is pretty nice, the keyboard folds flat against the screen, and as it is so thin, there is not much difference between the Yoga Book and the Kindle 10 HD. The screen is large enough to be able to read in comfort, whether it is through the browser or using a PDF reader (Bibliovore in this case). 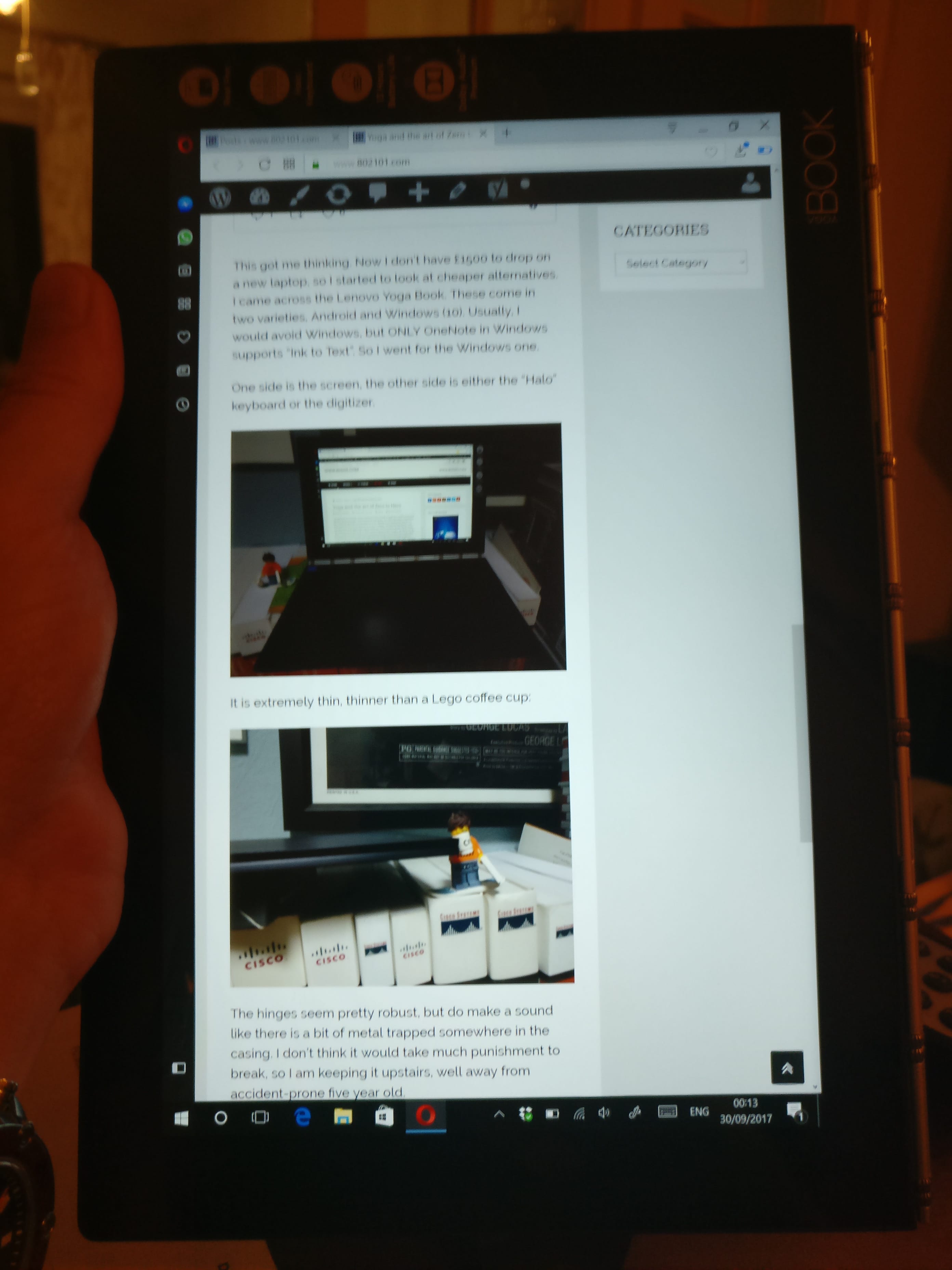 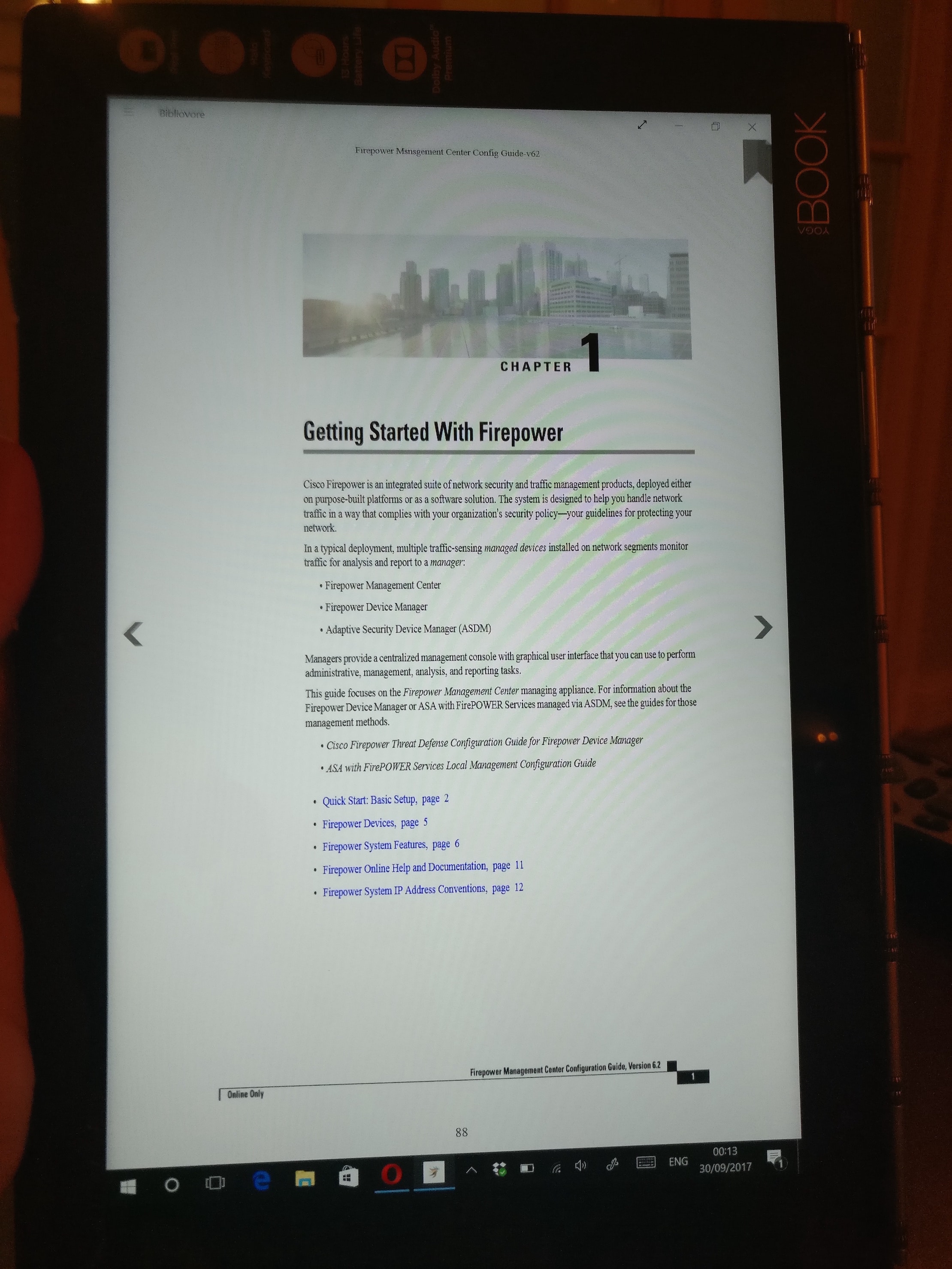 If you want to type, then pressing the pen icon on the digitizer turns on the keyboard lights. The keyboard itself is haptic (small vibration when pressed) and there is an audible sound, which is a little loud, but I am sure it can be turned off, or down. I have not investigated this part yet. Typing is fine, a little cramped compared to my MacBook Pro, but the two are not really comparable, the MacBook is much larger. But I can easily type on the Yoga book. 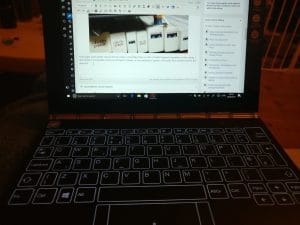 Moving on to the real reason why I purchased this, the handwriting. It took a little time to get this setup, you have to train the device to recognize your handwriting. There are fifty sentences you copy during setup, but I stopped training after about twenty, and the results are not too bad at all, albeit on a limited test:

On a longer test, i.e. when doing the Zero to Hero Security course, it is very useful to turn the device 90 degrees, so it is like a book, and to give yourself more of a bigger canvas, by two-finger pinching down on the touchscreen, which makes the OneNote page a bit bigger, but keeps the icons in the doc the same size as usual. I wish I had found this out a few hours ago… 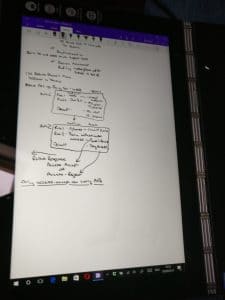 This makes it much easier to work with, however, it does look a bit weird when looking at what you have written on another device, such as my MacBook, but should look better once I convert it to text.

Doing the ink to text conversion is interesting, it will put things in larger fonts depending on how I hold the stylus, but I think this is just about me getting used to the stylus more and getting a more standardized writing style. It is nice to scroll the page with my left hand and continuing on the same page as well. The touchscreen is very responsive. You can also write on real paper. The Yoga book ships with a magnetic thing to attach the pad of paper. I have not tried it yet, so will see how that turns out.

Using the Yoga Book to write with while studying feels really good, it also feels like I am spending more time listening than trying to correct my typing, and wondering how to replicate the diagrams in my own notes. Now I can copy everything that is being written o the screen, including diagrams, as well as make notes as I go, so while it was a fairly expensive purchase, it does appear that it will be very beneficial moving forward. It is certainly MUCH easier than trying to type everything. Can the Yoga book be a permanent workhorse, though?

Out of the box, the Yoga book comes with 4GB memory, this is not upgradeable, but the device is not slow by any means. There is 64GB of storage, which is expandable through a MicroSDXC card, I plumped for a 128GB one, which will be useful for storing videos and PDFs on. You can also get a micro HDMI cable as well if you want to connect it to an external display. The default windows installation comes with a number of games on it, which I uninstalled pretty quickly, and this seems to be more of a standard Microsoft practice, than Lenovo installing lots of crap on it.

In terms of battery life, I have not tested this out yet, but it states that it should run for 13 hours, which is very impressive.

You can get an Lenovo Yoga Book from Amazon UK, or from the US site, currently only $384!

Give yourself a treat!