As you will see from the INE topology the Cisco 1841’s (R4, R5, and R6) require 256MB memory and 64MB flash. Generally, the 1841’s come with the base 128MB memory and 32MB flash (or no flash at all if you unlucky). So I purchased a three 128MB SODIMMs and three 32MB Compact Flash cards to put in them. This post explains ROMMON mode when using new flash cards.

Installing memory in an 1841 router

Installing the memory is easy enough, just take out the one screw and open the case up and install. If you have every installed any memory sticks before then this won’t prove complicated. The flash install is just a case of popping out the old one and installing the new one.

You can find Cisco’s page on installing the memory here.

When you first power on the router with the new flash card in it, it will (obviously) be empty, and you will be dropped into the ROMMON mode.

There is the option in ROMMON to download a file from a tftp server, and to do this is relatively straight forward, but the commands are kind of hidden.

First, we start with setting the IP address, at this stage make sure you have plugged a network cable into the first network port (0/0):

Then set the subnet mask:

Then set the default gateway:

Now we move on to specifying the tftp details

And lastly we start the process by entering the tftpdnld command again:

You should see some nice output summarizing your settings, and prompting you to continue: 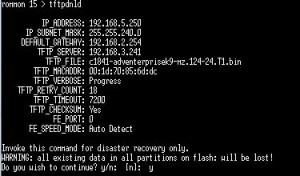 Once you confirm that you are happy with the settings, the specified file should be downloaded, have checksum validated and then copied to flash: 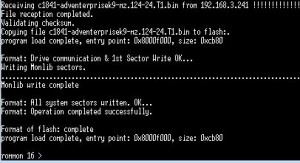 Once it is done you can type “reset” to restart the router, and, if all is good you will be able to see the router boot up properly, using the new image:

But this is just on the first boot, and once I reloaded the router, the message did not reappear.