Hurrah! I am certified in CCNP Routing and Switching!

I took the CCNP TShoot exam yesterday, I passed, but that’s not to say I found it easy. In fact I think this exam took me longer to complete than any of the other exams so far.

The format is that you are given a couple of multiple choice or drag and drop questions, and then it’s onto the trouble tickets.

To get a feel of how the ticket format looks, you can check out the online Cisco TShoot simulator here.
There are 13 tickets to complete, and the  layout of the devices is no big secret as Cisco very kindly publish the network diagram and handy relevant information, such as where the DHCP server lives.

The PDF is available with valid CCO login, but the pictures are below: 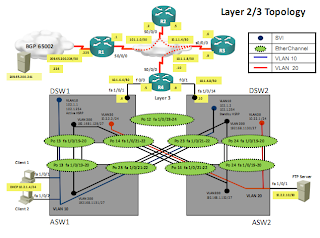 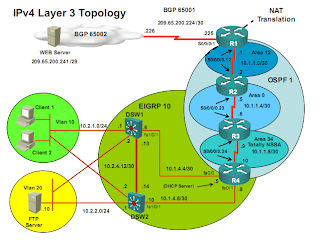 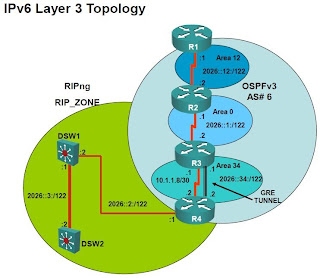 The good thing is that you can start a ticket, and if you don’t know the answer you can abort a question and move on to another one.
The answers are in three parts, consisting of where the fault is located, the area the fault comes under such as RIP, or GLBP or NTP (note that these were not on the exam – just examples), and lastly how to remedy the fault. If you are wrong on any of them then it will affect your answer choices for the next part of the answer.
I did abort a few of the questions, getting about five done within a couple if minutes and making notes on them as I went. Some configuration changes will really stand out from one question to the next, others are more subtle. I don’t usually use the paper given to me in the exams all that much, but I covered aside and half of A4 making notes.
One thing that did catch me out though was one of the questions I was sure I had  all three answers, i knew where the fault was located, the topic it came under, and how to remedy, but my choices didn’t match up (on the second and third parts of the answer) to the available options. I aborted and went on, thinking that it could be a bug that will be resolved by doing a different ticket and coming back to it later.
Once I had got the other easy ones done, my confidence level up a bit and with about half the tickets remaining, I went back to the one mentioned above, checked the configs again and now am 200% sure my first answers were correct, though again not ones shown to me in the screen.
That is until I moved the scroll bar down to reveal the other possible answers. A stupid mistake on my part, but perhaps a little trick also by Cisco to see who is paying attention. So anyway I got that one, and started to go back over the ones I had aborted.

Eventually after, well troubleshooting, I clicked the final “Done” button, and next and waited for my score to appear.

It didn’t.
Instead I was taken straight through to the survey part, which I completed, again a bit annoyed and went to see the proctor.

Thankfully the score sheet had printed and showed my passing score. I got 1000.

My way of doing this exam was to start with the client PC.

Firstly check that it had an IP address and see if it could ping the default gateway.

If this fails then you know the issue lies between R4 (the DHCP server) and the client. The chances of it being a physical issue are low, so the answer won’t be “Plug in a network cable”.

If the client PC can ping the DG (DSW1) then everything is fine up to DSW1. I then started from the other end, checking R1, then R2 and moving back down the stack. If R1 cant reach the destination (whatever that might be…) then the fault is on R1, and so on and so forth.I didn’t need to use many commands, and I think the only ones I used were:

There may be more, but I can’t fully remember them now.

Anyway, now the CCNP, is all done and dusted. I got my email from Cisco this morning and look forward to my certificate coming in the post.