Home
CCIE
Pass without dumps? It can be done.

I had a bit of a weird chat with someone over on LinkedIn, yesterday. I kind of thought this chat had been brewing since getting some messages over on Facebook and from the initial messages, it went pretty much as I thought it would.

No names will be given here. No-one will be no shamed and I have no desire to jeopardize anyone’s livelihood, but this is someone who lives in the UK (which is relevant later on).

I will help if I can

Although I doubt I am alone in this, I get a fair few requests for help. Some are easier than others. This one started on Friday, over on the Facebook page: 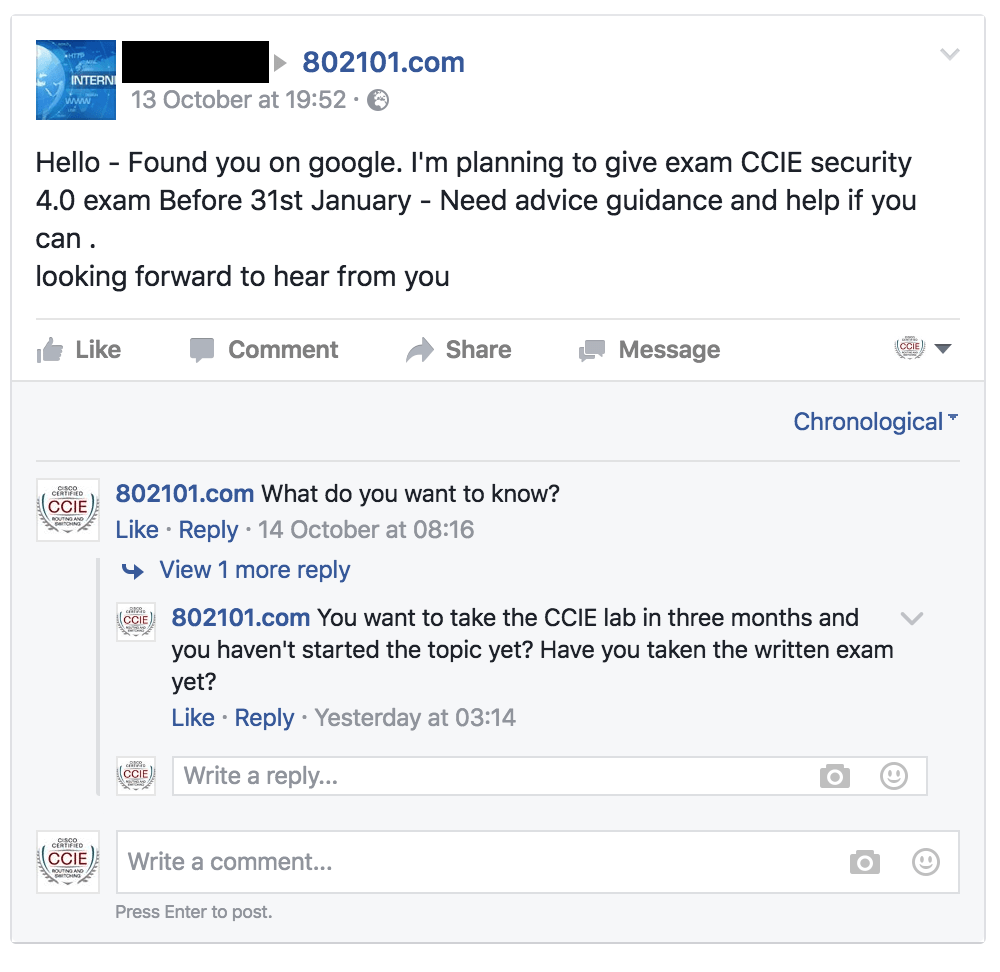 I have since deleted the post, again in the interests of keeping this person anonymous. The collapsed reply was that they were looking for materials, and help (very general stuff, but giving the impression that they had not even started to study the topic). But notice that they want to take the lab exam before the new CCIE Security v5 kicks in. 107 days. The alarm bells started to ring.

At the moment I don’t have any idea of their background, but their goal of three months is worrying.

I then started to get messages in LinkedIn. The name has been blocked out, but it’s the same first name as the person from Facebook. I am 99% sure they are the same person.

My replies are in blue text, just in case you were wondering. 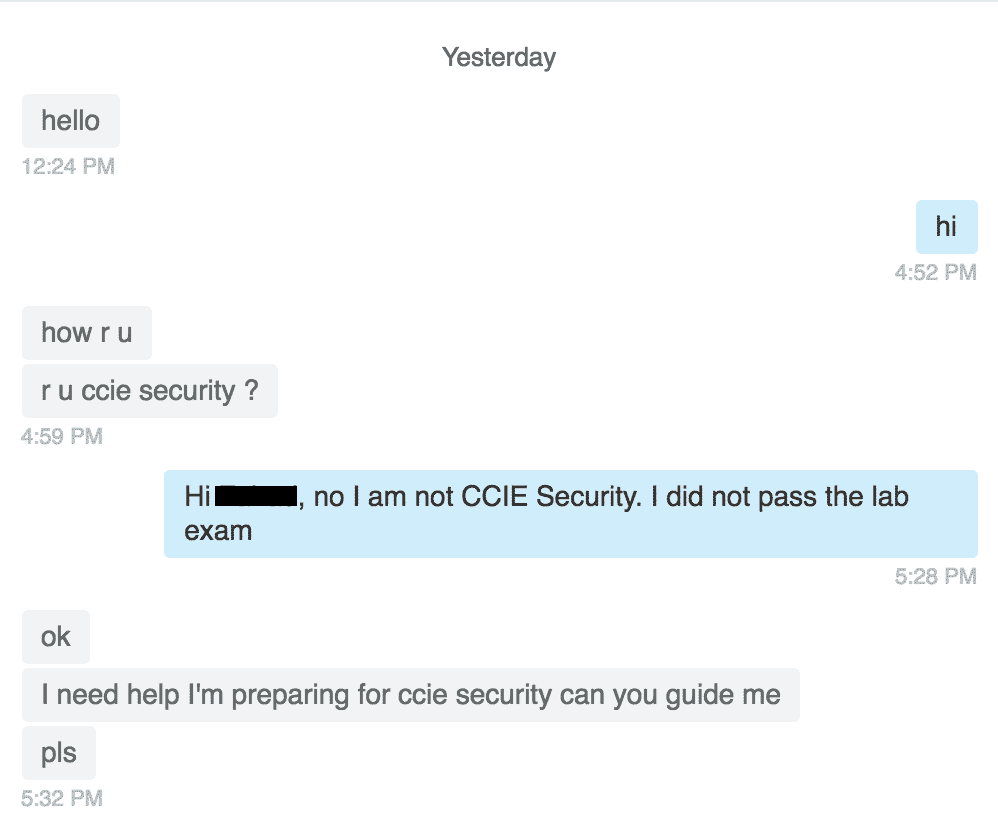 OK, seems like an easy request for help with the CCIE Security. Probably just asking for a little advice. Let’s find out: 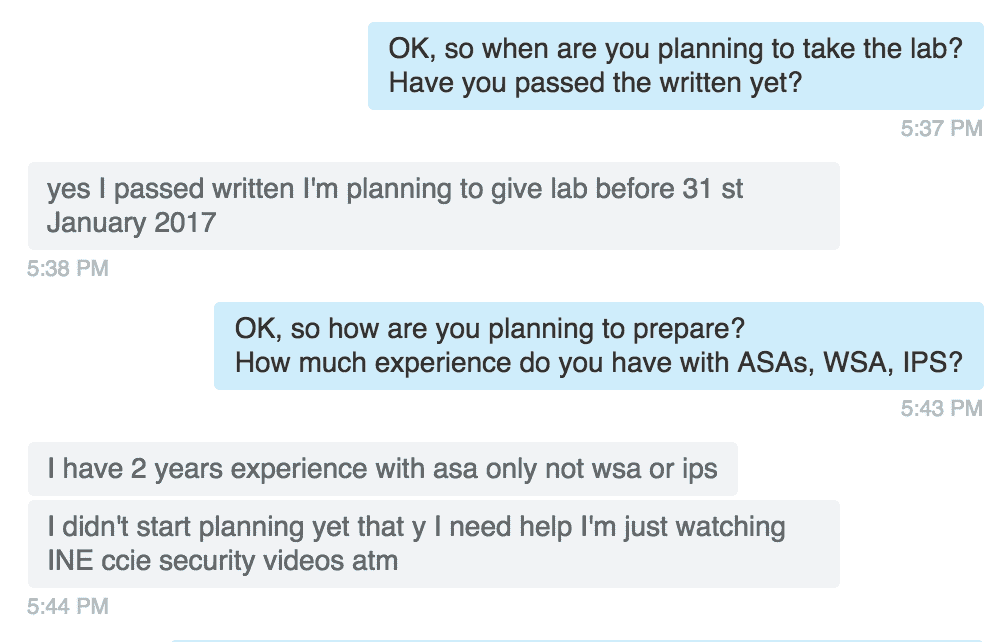 The good news is that the written has already been passed, so I guess most of the studying has already been done, and it’s just lab preparation advice that’s being asked for. The focus being the WSA, IPS and so on. The INE videos are excellent, so they are a great place to start.

The bad news is that no plan for studying has been thought of so far. Three months is tight, but doable with the written out of the way. 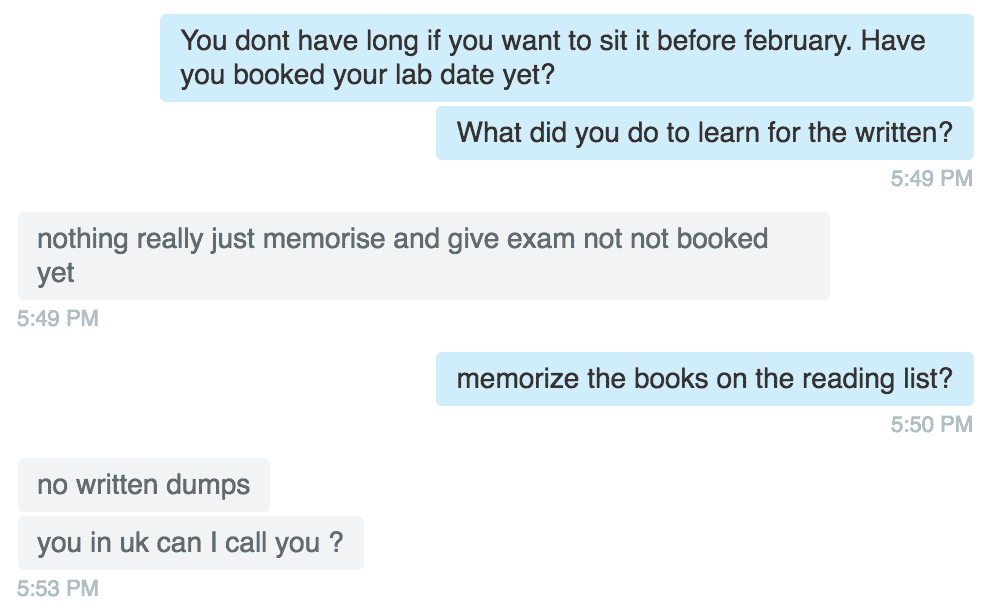 Bearing in mind that pre-v5 is the goal, one assumes the lab date would already have been booked (the v5 starts in February 2017, and the last mobile lab in the UK is mid-December). This is not the case. I know that there are no spaces in Feltham in December.

The most worrying part of the conversation though is that instead of at least trying to learn from the books, the person has just memorized dumps.

Immediately my willingness to help drops by an order of magnitude.

I don’t give out my number to random strangers, so that’s not going to happen. My mum warned me about strangers. But, not wanting to be rude, I still offer one bit of advice.

I advise that they try and get a lab date first, as this will influence whether or not the v4 is realistic, or not. It is clear from their reply, though, that they are not really wanting to put in any actual work: “v5 will take long time I think I should get date” – so instead of working properly towards it, they want to push ahead with the v4, in a record amount of time. But it is not up to me how someone spends £1400 ($1900). But because of that reply, I decided to offer one last warning. Purely because others would have dropped the name to interested people at Cisco.

But because of that reply, I decided to offer one last warning. Purely because others would have dropped the name to interested people at Cisco. I decide to wrap this up. 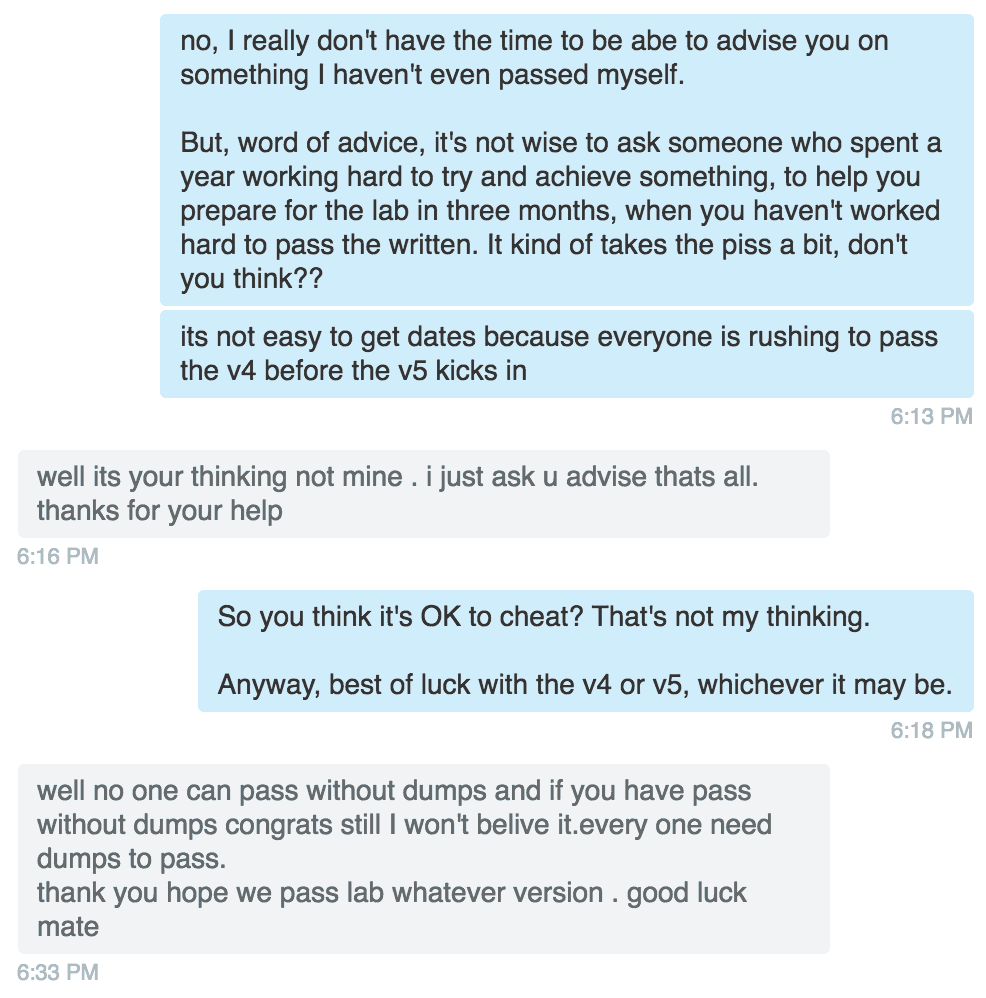 Clearly, this person, who by the way, is already a CCIE in Routing and Switching, thinks that using dumps to pass the written is absolutely fine.

The rise and fall of the dumping community

The crux of it all is in the line “no one can pass without dumps“. This is a sentiment felt by many and I can understand why. I don’t agree with it 100%, but I can understand why people feel this way. The fact of the matter is that the support given by Cisco to the various tracks is only good for the Routing and Switching and the Collaboration. As you can see from a previous post, the

The fact of the matter is that the support given by Cisco to the various tracks is only good for the Routing and Switching and the Collaboration. As you can see from a previous post, the official certification guide system by Cisco is severely lacking in content across all tracks. This is one reason why people turn to dumps. The other is laziness.

Cisco have recently overhauled all of the written exams, all tracks at all levels. With new content being added on a much more regular basis, making it harder for the dumpers to produce dumps. There has not been any official statement from Cisco (as far as I know), and Darby certainly does like to blow his own trumpet. He claims to have driven all of the dumpers out of the Sadikhov forum.

I remember Sadikhov from back when I was studying for my first IT exams, it was a vibrant place full of people. Now it is like a set-piece from The Walking Dead. Only a few people go there anymore and what was once a hub of information now resembles the Internet-version of a post-apocalyptic wasteland. But, from what I have read, there does seem to have been a massive shake-up, and the validity of dumps is greatly reduced.

Does everyone “needs dumps to pass”?

Clearly not. It is easy to see the difference between a CCIE who passed the written and lab by taking the easy route, and one who actually studied.

I was recently speaking with a friend of mine who works as a recruitment consultant. He told me of a company that had a CCIE in and paid a lot for this person. It was clear though that the engineer did not have a CCIE-level understanding of the technologies. So much so that a Juniper rep called the company and told them just how much this “expert” was costing them with the frequent calls to the Juniper techs for minor issues. While Juniper and Cisco are different technologies, a suitable CCIE should at least be able to Google basic issues with other technologies. The engineer did not last long.

While the written exams are hard to pass, partly because of the level, and partly due to the lack of support by Cisco, they are not impossible. I have been lucky so far.

Know what to study for the written exam

Firstly, I stuck to information on the Cisco website, and after doing so many written exams over the years you can start to get an eye for the kind of information they will use as questions, such as with a list of “does/does not support”, this will be a high contender for inclusion on a written exam. It’s all about reading and trying to get in the mind of the exam writer. It just takes time and practice. Everything is there on the Cisco website. Have a look through the posts I made in November and December or last year. All of those were just a case of reading the Cisco docs and making notes. I know I even used some of the same docs that questions were directly taken out of.

Secondly, for the Routing and Switching I wrote three books on the subject. I immersed myself in the topics for well over a year and knew then back to back. Not saying that everyone should write books, but it is the immersion in the technologies that pushed me through.

For the Security, again I was lucky because I have worked with ASAs for a number of years, I also work in a heavily mandated environment, so the rules and regulations, such as PCI-DSS, BCP 38, ISO27001 are a day to day consideration.

Lab for the written, not just the lab

While the written exams are not hands-on, like the lab, they should be treated similarly. Don’t just read the topics, actually, do them. OK, do them where you can, don’t try and implement PCI-DSS in your company just because you are having to read about it. That would be crazy. So, read it, lab it, repeat.

I can’t remember where I read that (“lab for the written…”), and I am sure that the original author wrote it much better than I, but the principle is the same. If you want to do well on the written, you need to lab it up to learn it properly. I think it was my friend Andrea on Twitter who said it first. I’ll try and find the original tweet.

Now, what if I needed to pass something like the Wireless certification? If the time constraints were there, then I could be tempted to head down the less-studious route. But then why force yourself to study for something and impose a harsh time constraint? If someone tells you that you need to be a CCIE in 6-months time, then this is the wrong way to go about studying. It’s creating an atmosphere and pressure that is not conducive to studying effectively and increases the chances of failure.

Only you will know when the time is right to take the lab exam. When you think you are 80-90% or so there, then go and book it. You can book labs months in advance, and it is good to have something to work towards. That said, make it realistic. Do not sit the lab before you are ready. don’t resort to dumping your way through. The truth will out eventually.

Lastly, don’t resort to dumping your way through. You can pass without dumps. The truth will out eventually. Whether in the workplace, or by posting in the wrong place, or asking the wrong questions to the wrong person. Cisco do find out, and do make a stance against the use of dumps. Now whoever this is can never take a Cisco exam again. Which is their future in networking pretty much stuffed.

Study hard and be proud of your achievements. You will be a better engineer for it.