I had been meaning to finish this off for a while, but what with the studying and all, it kind of got put to the side. Anyway, I got sent an email, from a very friendly guy, asking if I could send the initial configs so that he could create the IOU files himself.

Instead I created the IOU file, including a clickable image map (again this is a real push towards going solely IOU for the next volumes). It looks much cleaner than the GNS3 version, and I can reuse the image that’s in the book, so it keeps a much more consistent feel.

Obviously the interface names will be different (no GigabitEthernet in IOU), but you are a bunch of clever people, so I am sure you’ll be fine! 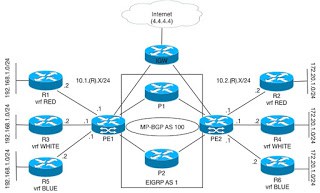 So far the majority of people responding to the poll on the right hand side are in favour of IOU, but there is still quite a few days left, so who knows which way it will swing.

The IOU-web file for MPLS for Cisco Networks is available to download from the books section above.