In this post we will look at solving a problem using FreeRADIUS. I wrote some time ago about separating read-only access from admin access to Cisco ASAs using Microsoft NPS. It worked in theory, but a problem was found that an AD user who was not a member of either OU could still authenticate to the ASA using ASDM at level 15. Clearly, this was less than ideal. Check out the link though as it shows how to set up the ASA to use Radius and we’ll need that in a while.

I bounced around some more ideas, tested things out using Microsoft NPS, and even tried TACACS using Tac-plus. Still no dice. I went back to the idea of using Radius, mainly because of the fact that I didn’t want to have to run two systems to do the same thing, NPS got us most of the way there, TACACS would probably have finished the job, but requires a lot more investment in time, knowledge and money. Coupled with the fact that the IPS modules in our ASAs only support RADIUS I knew it was time to head back to the RADIUS idea and try and put this to bed.

Microsoft NPS doesn’t cut the mustard, though. Yes, it’s a good product, but clearly not the right product for this scenario.

Freeradius, on the other hand, offered something new, and I stumbled across the idea of using it from this very excellent post here. Our set up is slightly different, though, as we are using Microsoft AD as the LDAP backend, and require the use of AD groups as well as nesting of access control.

To explain, we have two users; npstest is a read-only account. It should have access to the ASA through SSH and through ASDM, but only at a maximum of level 3. It is a member of the AD group “sec-fw-readonly”. My own account should have full access on both SSH and ASDM and is a member of “sec-fw-administrator”.

We start with a Centos box and install freeradius using the command:

Once free radius is installed we need to head to the folder /etc/raddb/ and from there into the modules directory (/etc/raddb/modules). The first file we need to edit is the ldap file (vi ldap) and set our details for connecting to the AD server:

The first line specifies the domain controller to connect to, and the next line specifies the account to use, the third line is the password for that account. The basedn is where freeradius should start searching for user accounts, and the filter does some funky mapping of AD attributes to freeradius attributes. The groupmembership_attribute will be needed for the reading of AD groups which we will need later on.

Lastly for this file is to uncomment these two lines:

If you don’t uncomment those then you will get an “operations error” message when trying to search.

Now we can edit the “default” file in the same folder, and make the exact same changes as the inner-tunnel file above.

Once this is done we can start defining our clients, this is in the file /etc/raddb/clients.conf and add your ASA in:

With the secret being the shared secret you are going to use on your ASA.

In order to get both SSH and ASDM working as we need them to we need to uncomment one line in /usr/share/freeradius/dictionary, look for the following:

Just uncomment the $INCLUDE dictionary.cisco.vpn3000, and save the file.

Before we set up our ASA we are going to set up our group access in Radius, and to do that we go back into the default file. In the post-auth section I added the following:

Finally, we can switch our ASA to use freeradius, the config looks like this:

Now we can test. Firstly by logging in with my account: 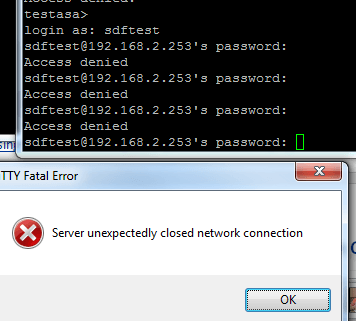 Finally, we have a working solution!