Home
Fun
kids
Dammit!
There I was happily catching up with season 2 of Arrow last night when I heard a very loud crash coming from upstairs. I ran upstairs, checked in on the wife who had retired early after spending many hours gardening (and a few having drinks with friends), she was sitting upright in bed looking a bit scared.
Bedroom looked fine. Nothing out of the ordinary in the spare bedroom, and family bathroom was still intact.
So the source of the noise was either in the kids room or the study. There was no crying or noise from the kids room, and because of the amount of noise, and the lack of child-movable furniture in the boys room it was unlikely to stem from there.
This is what the study looked like when I opened the door: 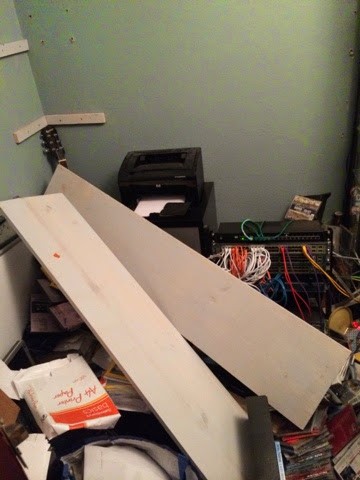 The shelving you can see above usually resides a bit higher up, much more horizontal, and is usually fixed to the wall. 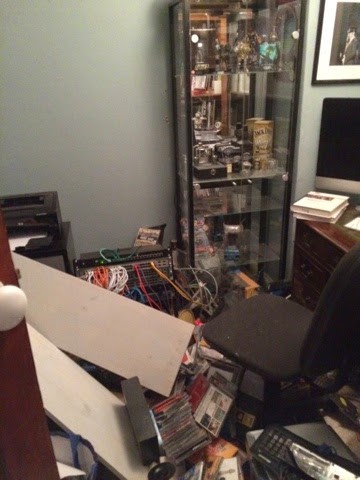 The CDs are usually on the shelves. 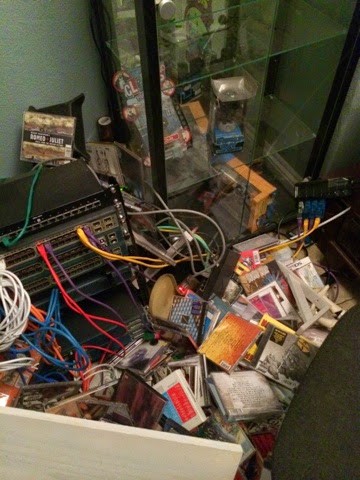 Loads more CDs, somewhere in there are two raspberry PI, a NAS, a switch, and some Star Wars Lego figures.
Earlier in the day, the boys had gone upstairs, and I found them in the study playing with the figures. So, were they happily pulling on the shelving? Who knows, thankfully no toddlers were buried under the avalanche of CDs, or, more importantly, hurt by the shelves. They slept through it. Not saying it was definitely them, but they do like to play in Daddies office whenever they can.
I had already removed the figures from the glass cabinet and put them out of reach on the shelves. But toddlers can climb. I found one sitting on my chair, which had not moved, so it’s possible that the shelf support was used as some kind of toddler leverage mechanism. Seriously these two are like some kind of Mission Impossible duo, no matter what it is or where it is they will find it. Still, they get points for ingenuity. These same points get removed for messing with my stuff, though. Don’t get me wrong, I am not like Will Ferrell from “The Lego Movie“, when they are older then they can play with my stuff, just they are still a little young. I did buy them some Spiderman Lego, but they are a little heavy handed with it, and get frustrated when they can’t get the bits where they want them to go. But it’s good for their dexterity, so I am happy to let them play with it. Just not in my office. It takes me long enough to put the cables back in the switches after they take them out. So the office is a bit of a no-go area for them.
I havn’t had a chance to sift through yet. It doesn’t look like anything in the network rack has been damaged. Which is good, because I really don’t fancy having to replace that lot.

Not sure if the Star Wars figures made it through unscathed, though. They are buried under a hundred or so CDs.