It’s fair to say that many companies have felt the pinch in this last worldwide recession. Certainly Information Technology (IT) in all it’s forms has not been excluded from this, jobs have been outsourced, or shared amongst other team members as another is let go, or cheaper workers have taken their place. As a personal comment, I went from a very well-paying job in the city to a job in the suburbs paying half of what I was on after being made redundant, thankfully I have bounced back, but times were tough, and i know of many others in a similar situation. Most information technology salaries have, over the last few years, dropped considerably, when compared to the pre-recession era. So how has the number of CCIE jobs, the Cisco salary scale, and especially the CCIE salary scale faired?

Over the last 9 years, the CCIE salary scale has actually changed very little, which is good news for anyone trying to justify the cost of the CCIE exams vs the potential salary increase. 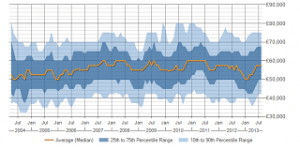 Now if we compare this against the CCNA and CCNP job salary scales, again we see very little change over the same period: 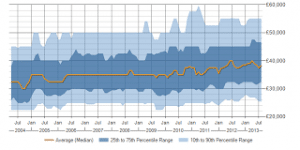 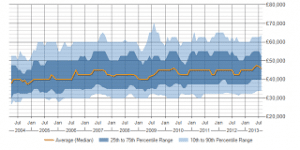 We can see that there has been very little movement within the CCNA and CCNP job salaries on offer, in fact, the CCNA is showing a very steady climb.

Although the CCIE salary has stayed around the same, the number of roles available has fluctuated dramatically:

Number of CCIE roles as a percentage of total roles

Granted, we are only talking about a couple of percentage of overall IT jobs, but there is still a considerable change. Now let’s look at the CCNA and CCNP for comparison.

CCNA roles as percentage of total

CCNP roles as percentage of total

So overall, we can see that the recession as it was in the period 2009 to 2011 is now slowly recovering and demand is, once again, climbing back to pre-recession levels.

The number of roles requiring any form of Cisco certification has risen and fallen in-line with the recession. The salaries for the CCNA, CCNP and CCIE have only changed by a few percent over the years and are, in general, on the rise again, which is good news for all Cisco certified people!

We can see that the average CCNA salary is around £37,000, this rises to around £46-47,000 with the CCNP qualification and then to £57,000 with the CCIE certification. So this does show that all the study, hard work, and dedication will pay off!