Just come out of the CCIE Security Written exam. I passed it after a couple of weeks study. I am not going to break any NDAs here, so it’ll be a brief post. Certainly working in a PCI/HIPAA/SOX environment does help, I spend a lot of time discussing and implementing security, so I started with a good foundation.

Most of the stuff was pretty well covered in the posts I have done over the last couple of weeks. There were a couple of curve balls, but not enough to put a dampener on it.

This gets the CCIE Security written exam out of the way before Christmas. I can now afford to have a little bit of a break now before the new year. 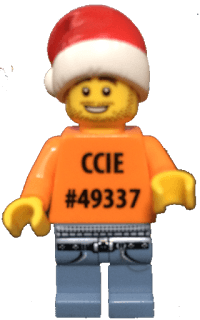 I have a couple of things to do. Finish the UNetLab topologies for the books, lots of people have been asking for them and have been very patient, which was appreciated. I plan to finish them this week.

The proof of the next book (CCNA and Beyond) should arrive soon, so I should be able to finish it off over the Christmas period.

Then I have 18 months to prepare for and take (and hopefully pass) the lab.

I’d like to get this down to a year, which leaves 6 months for one or more attempts at the lab.

I will carry on with my own CCIE Security lab, since starting it there has been a new ASA image released which has less of a memory footprint, so that will definitely help with resources.

Still need to work out some WSA stuff – the VM doesn’t want to play nicely, and then there is the whole licensing thing.

So, lots of challenges, but I now have (a maximum of) 18 months to do it. Merry Xmas everyone!