Home
Emerging Technologies
ACI
It is 2017! Long-time, no see. How are you?

It is now 2017! It feels like a long time since I posted. It’s been just under three months… and what a three months it’s been.

2017 is certainly shaping up to be an awesome year!

In November, I received an email from Packt publishing, asking if I wanted to write a book. A cookbook. On ACI.

It is no secret that I enjoy writing, but I did not have much experience with ACI. So I thought about it for a day and discussed it with my wife.

The issue with ACI is that it’s really expensive, so I would not be able to buy the equipment. There are places you can rent the equipment, but there is either a very long waiting list (like INE’s data center racks), or run by people who do dumping labs (exact DC CCIE lab topology, all the old questions etc), so they would not be getting my money. Cisco DevNet offer sandboxes, there are ones that do not require waiting, but these are a bit limited (but great for having a poke about), and a proper physical rack, which has a long waiting period.

So, while tempting, there are valid logistical issues. Still, the wife said that I would be foolish not to try. On the grounds that if I declined, I would probably not get the opportunity again, and that I like a challenge, I accepted.

Thankfully there is a simulator. For a brief period of time, it was available to download from Cisco. I even managed to get it activated (enormous thanks to a friend of a friend). That got me up and running.

The ACI simulator is not perfect, it is a simulator after all, but it works well enough. I did also call in another favor from a friend of a friend to get the ASA device package. I am pretty happy with how it has turned/is turning out.

ACI is cool and fun and I am glad that I did not let my fears put me off.

The book will be ready in a few months. I have one and a half chapters to finish the first draft of, and then do any changes advised by the technical editor.

My technical editor is Terry Slattery. If you do not know him, he is the world’s second CCIE (the first one outside of Cisco), and he wrote the Cisco IOS.

So no pressure there. Nope, none at all… It does kind of feel like cooking for Anthony Bourdain in your own home, you know he is going to be polite about what you cook up, but you are going to worry about serving up something sub-par for someone of that caliber. He is, however, making the book much better. 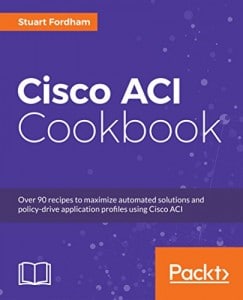 Sometimes you have to enter the unknown!

Sometimes you have to take a risk. With risks come rewards. So, when I saw that Cisco were accepting entrants for the 2017 Cisco Champions program, I decided to apply.

I thought it would be a long-shot. But no-one every gained anything by doing nothing. I December I even got an email from one of the people on the champions team suggesting that I should apply (which I had done at that stage, but using a different email address).

I saw on twitter that some of the people I follow had been awarded Cisco Champion 2017. I could see how elated they were when they got their welcome email. I checked my account. No email.

Looking at who was awarded, it was no surprise. They are some smart cookies. People I admire. I was pleased for them, but sad that I had not got “that” email.

But then a day later I did get that email. I was elated as well. I am a Cisco Champion for 2017. 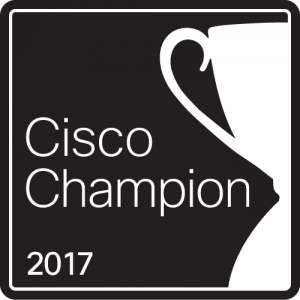 We had the first web-ex today. They other champions are a fun lot, and I think it will be fun.

I will be starting the CCNA CyberOps certification towards the end of the year. Should be interesting. I will post more about that over on CCNA and Beyond when I start it.

My big plan for 2017/2018 is to retake the CCIE Security written and lab. I will have to learn FirePower and a few more things, so there will be some hard work ahead. While some of the studying will be a good refresher, some will be new. It’s all about getting back on the horse.

The only failure is in not trying. Never give up hope.

I hope it is for you as well. 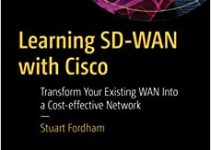